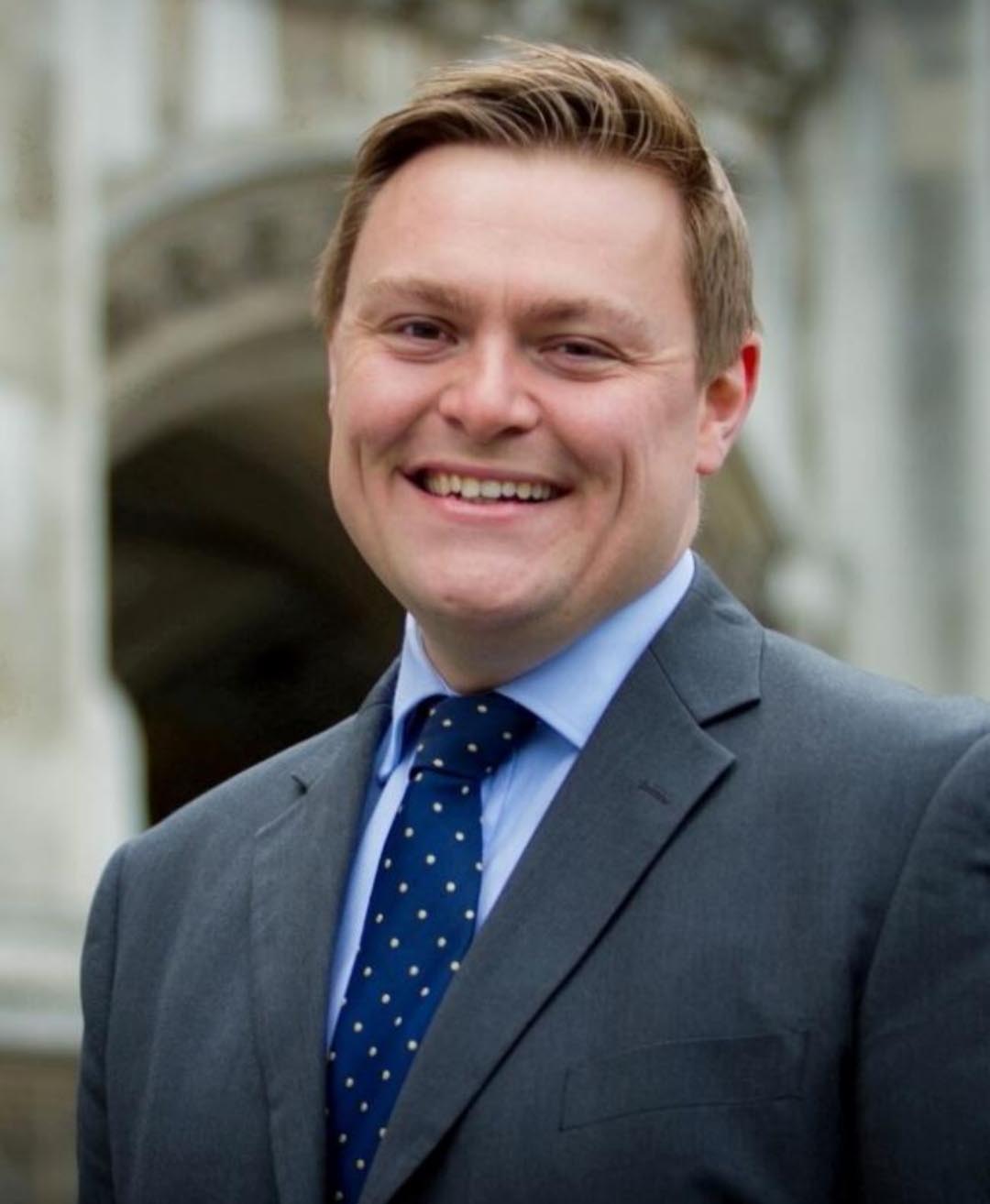 Will Quince M.P was a Solicitor for a brief period and then was elected as a Conservative Member of Parliament. He adamantly and repeatedly refused to write, on behalf of a constituent, to the Lord Chief Justice, Sir Ian Burnett, regarding proven criminality by a member of Sir Ian's Private Office staff. The Met Police and the Essex Police were informed of the matter. Will Quince is the only person who can resolve the impasse but is too much of a spineless coward to involve himself with the office of the highest judge in the land in case he uncovers a hornet's nest. Will Quince served the public in his constituency as their Member of Parliament. I reasoned therefore that this qualified him as a 'public body' for the purposes of taking his irrational decision not to write to Sir Ian Burnett for judicial review to the High Court. Only later did I find out an M.P is not a 'public body' for the purposes of Judicial Review. But I certainly had Will Quince worried. Eventually, as you will see, he called the Police. 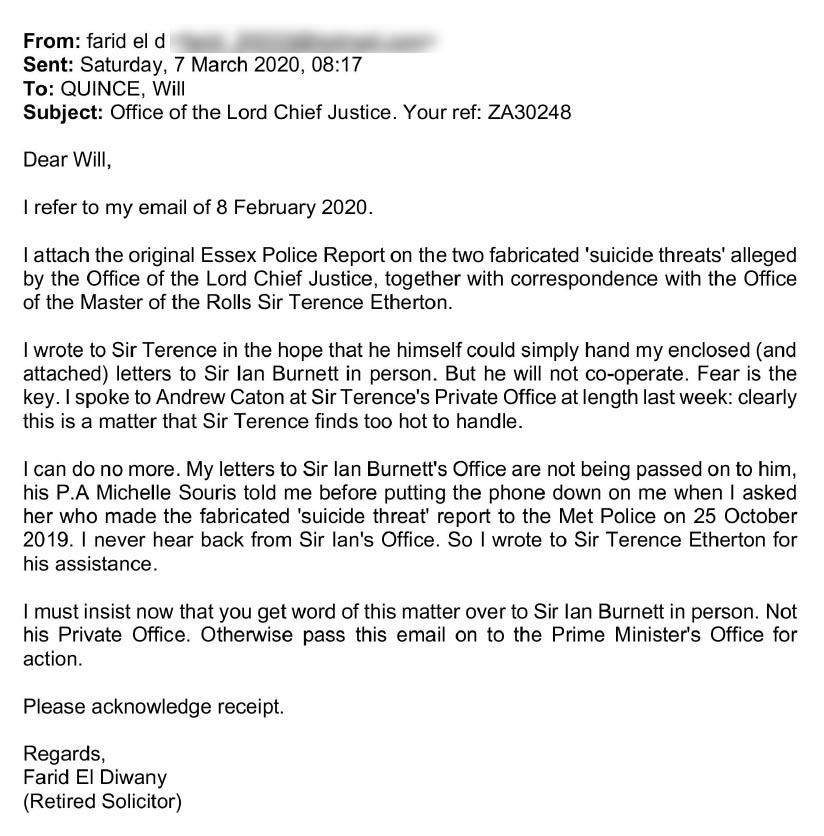 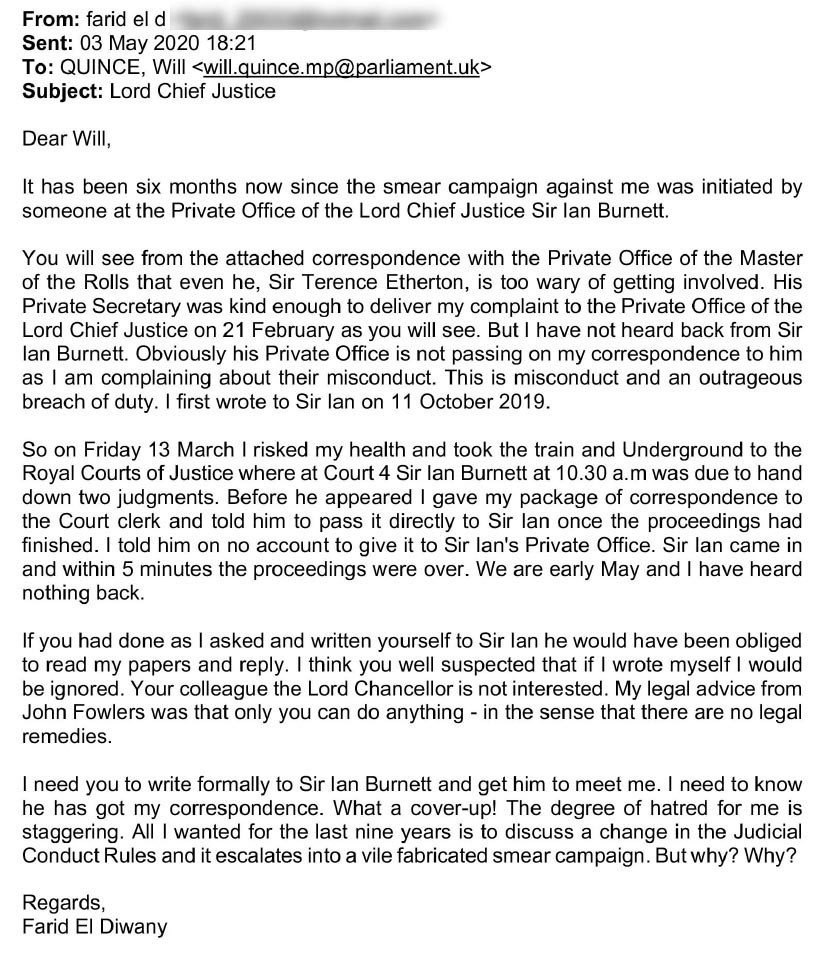 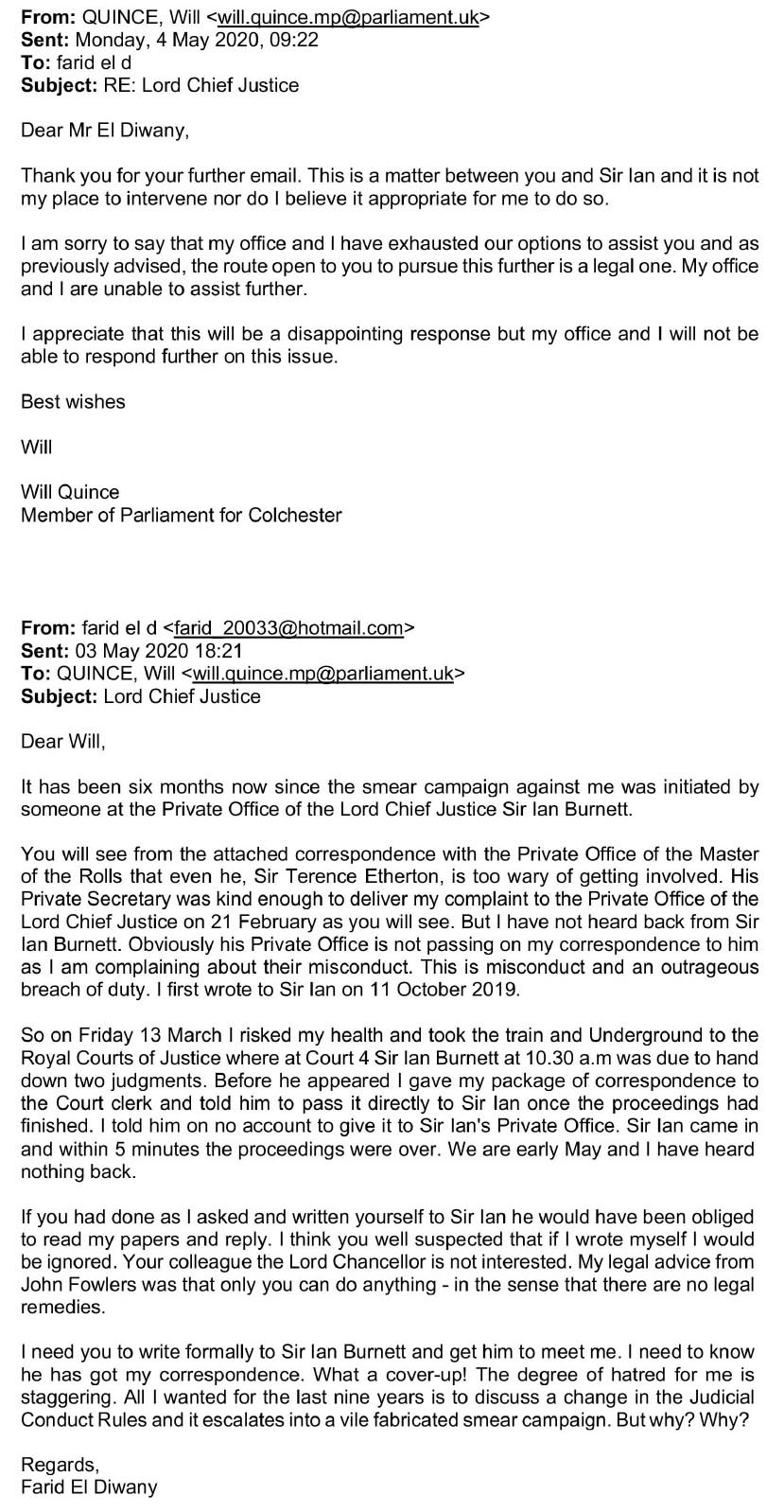 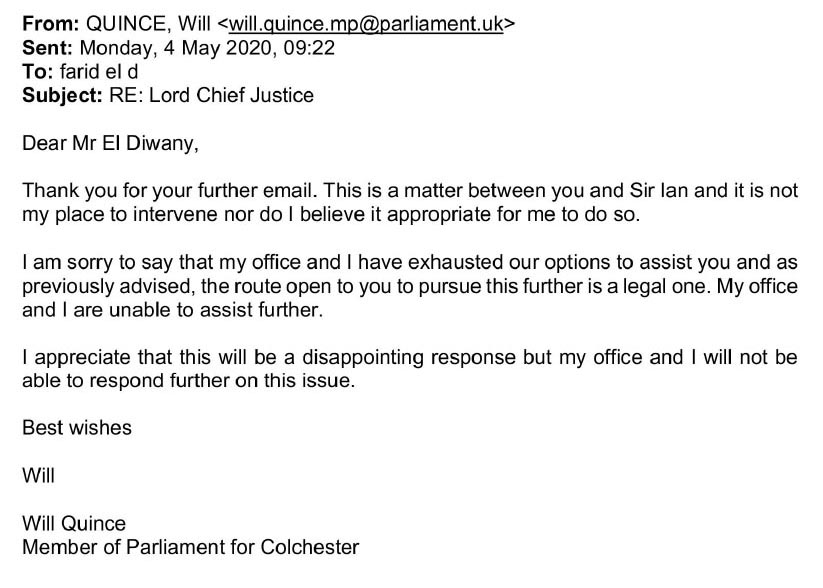 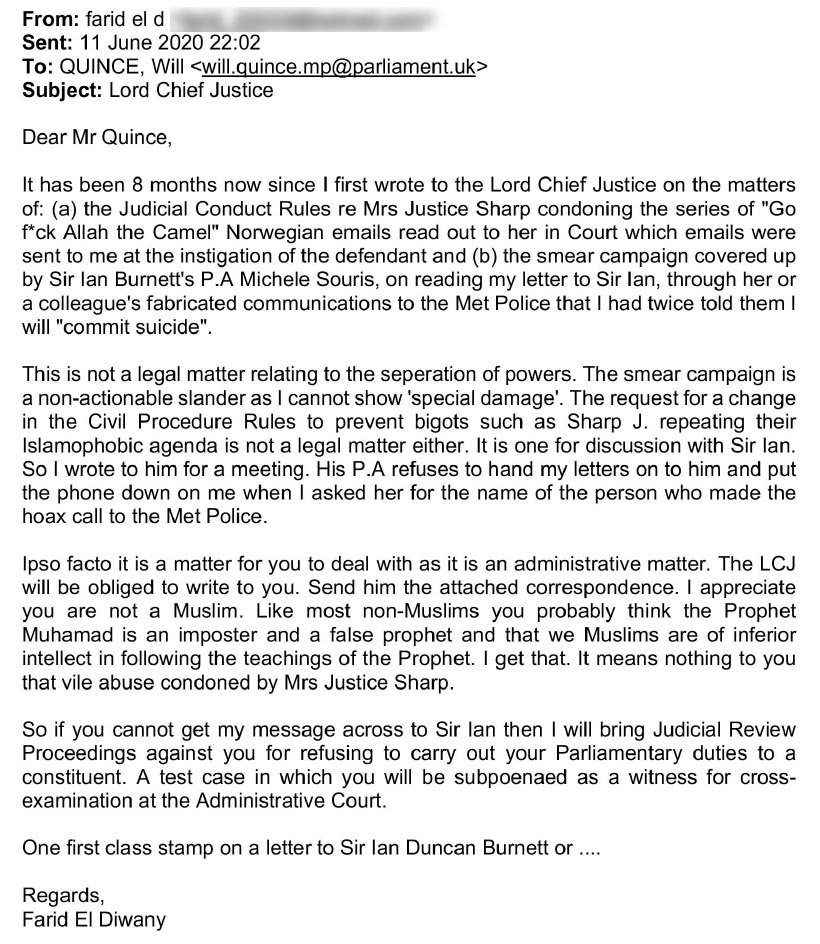 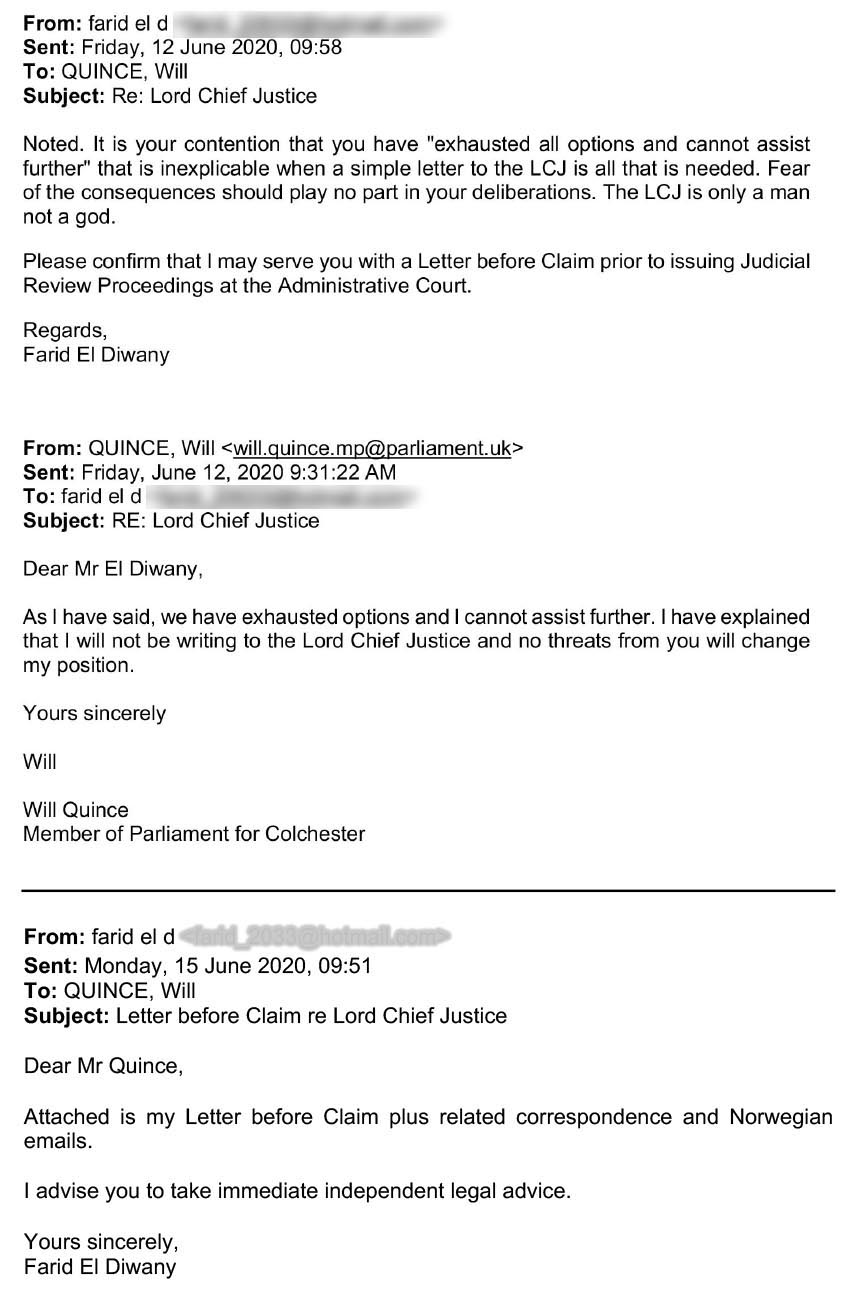 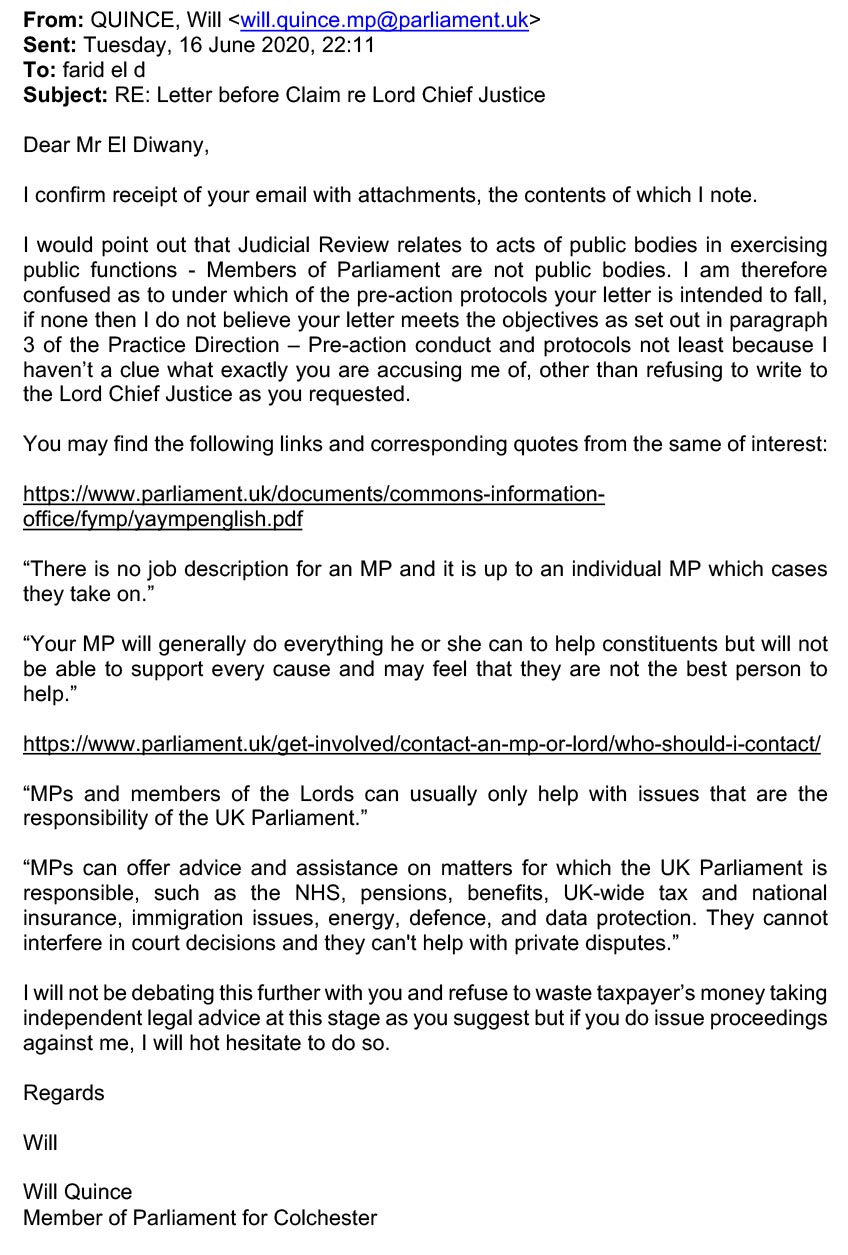 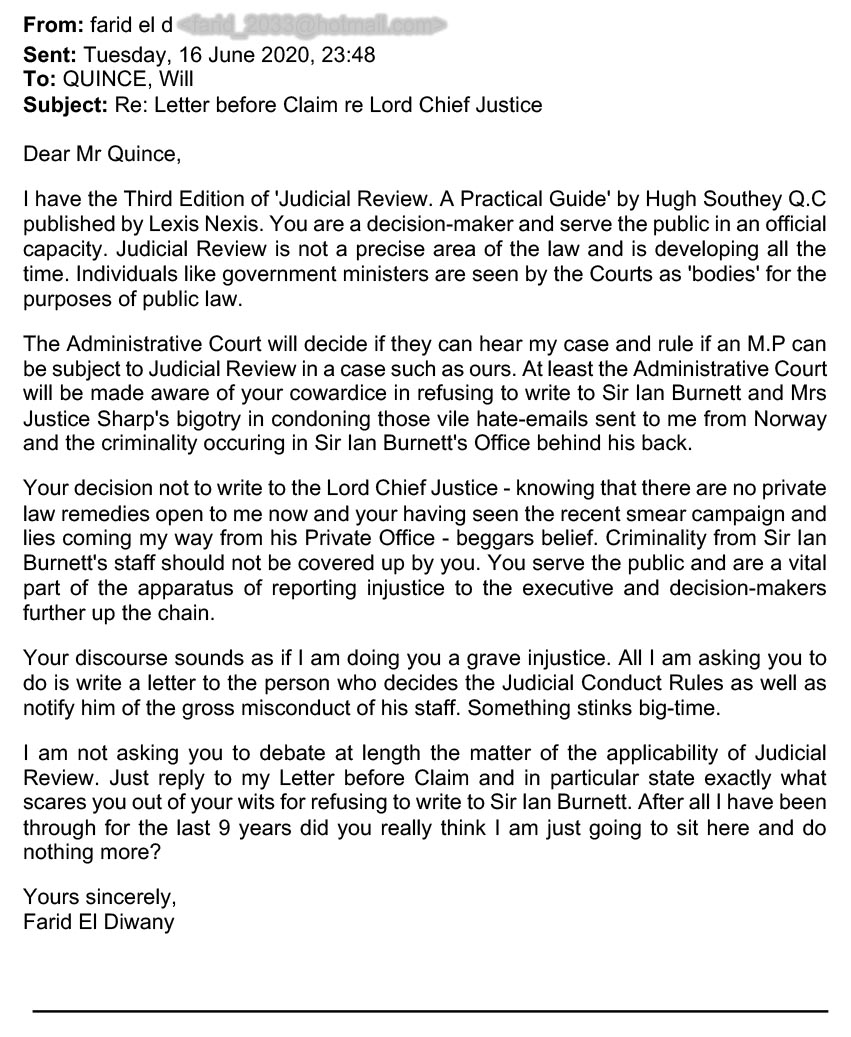 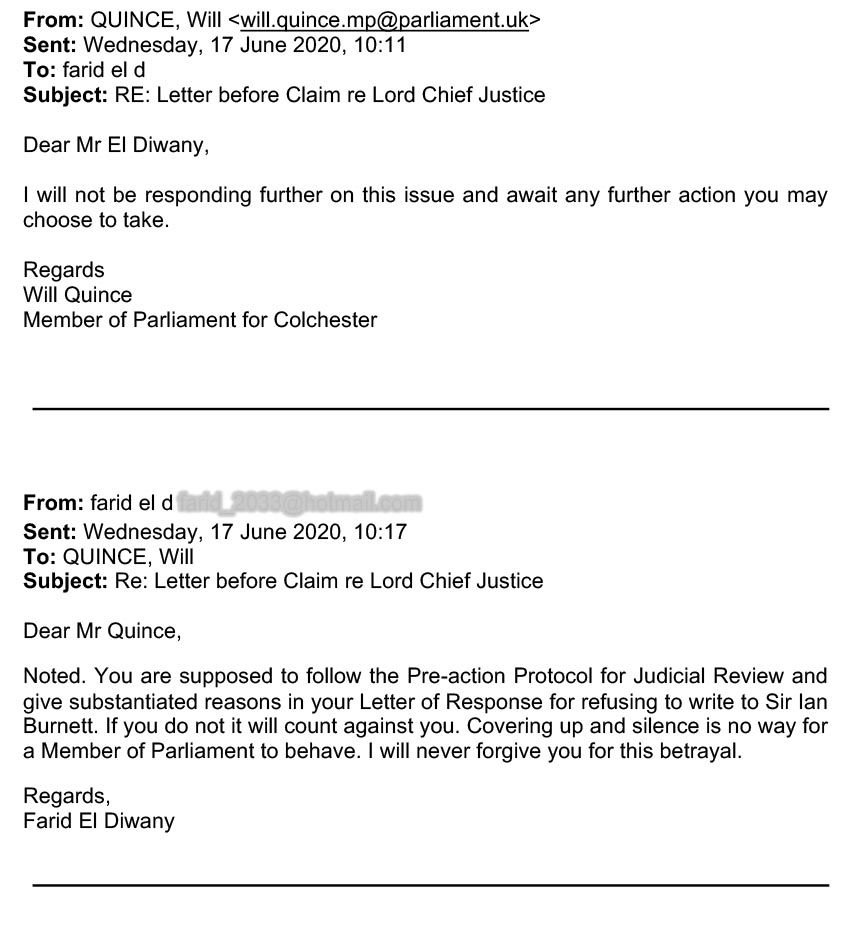 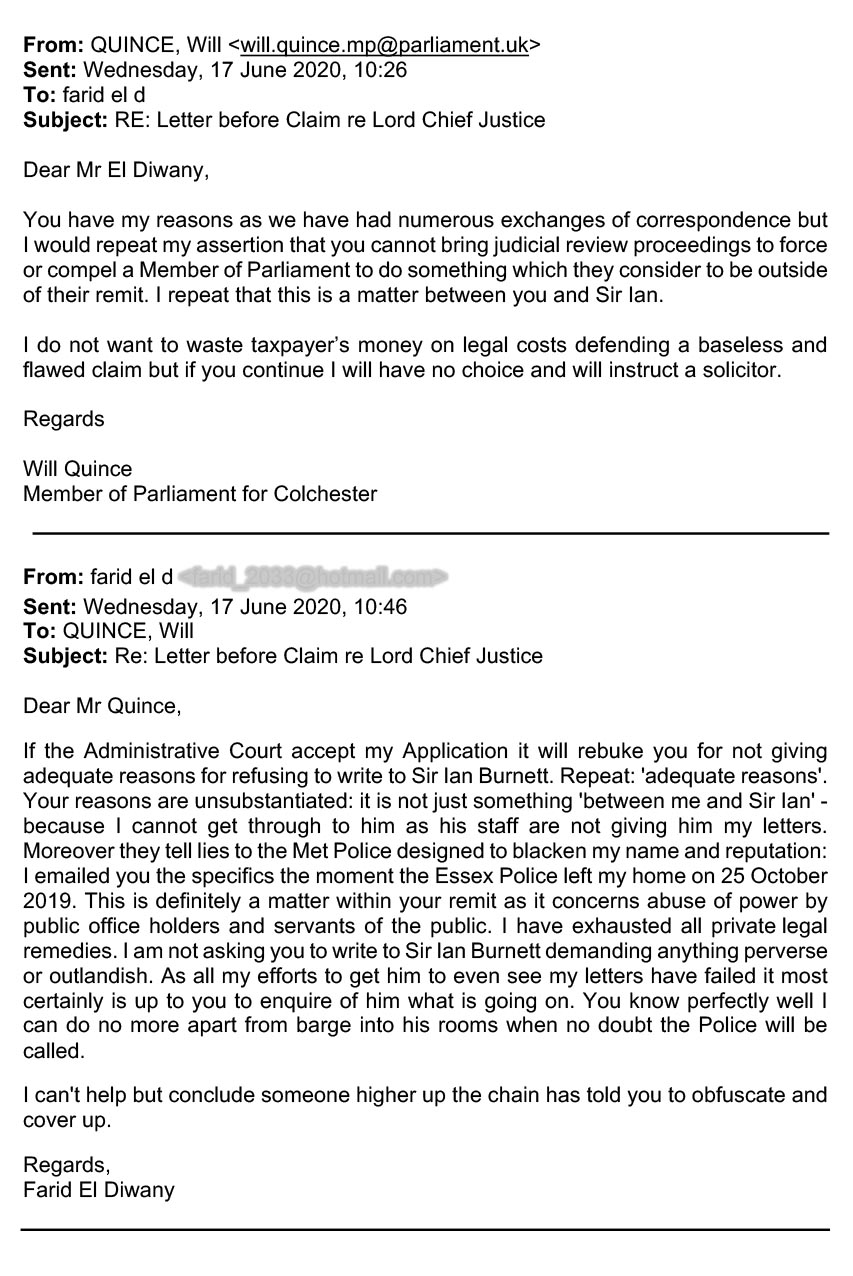 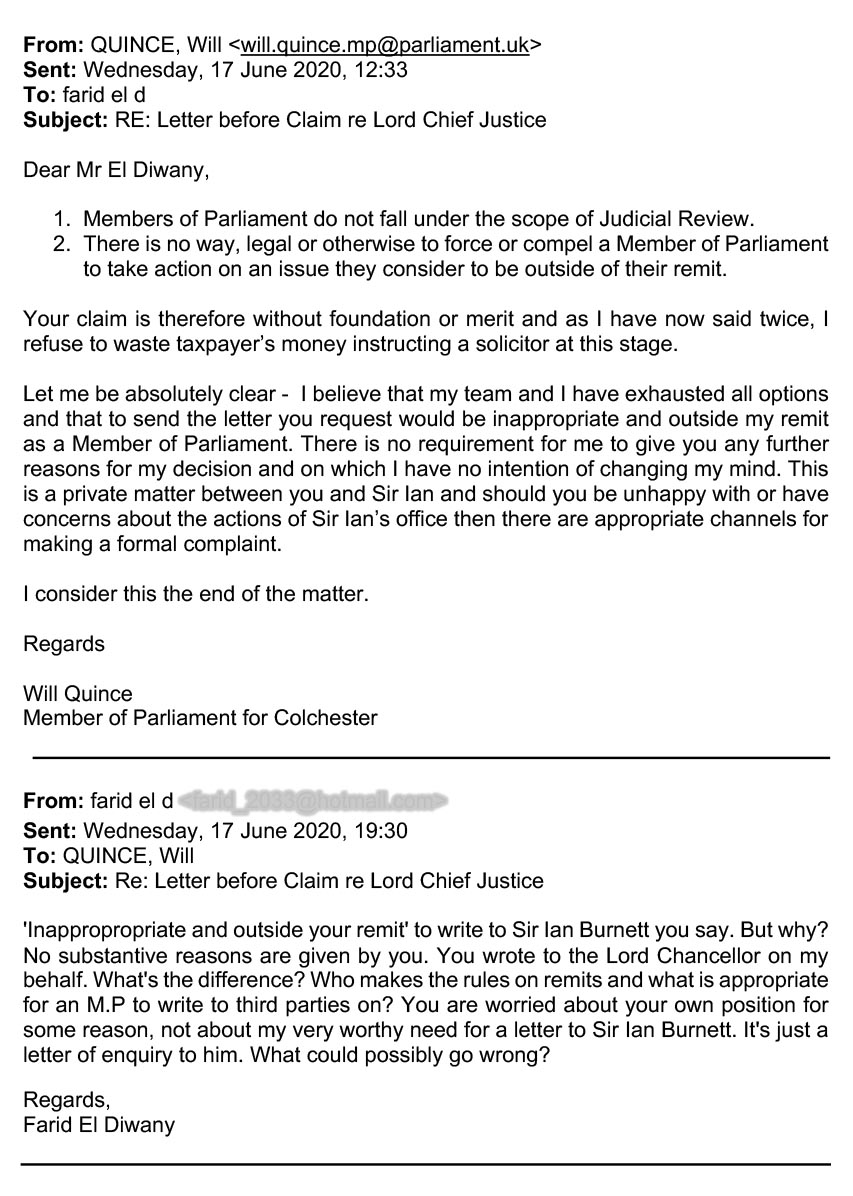 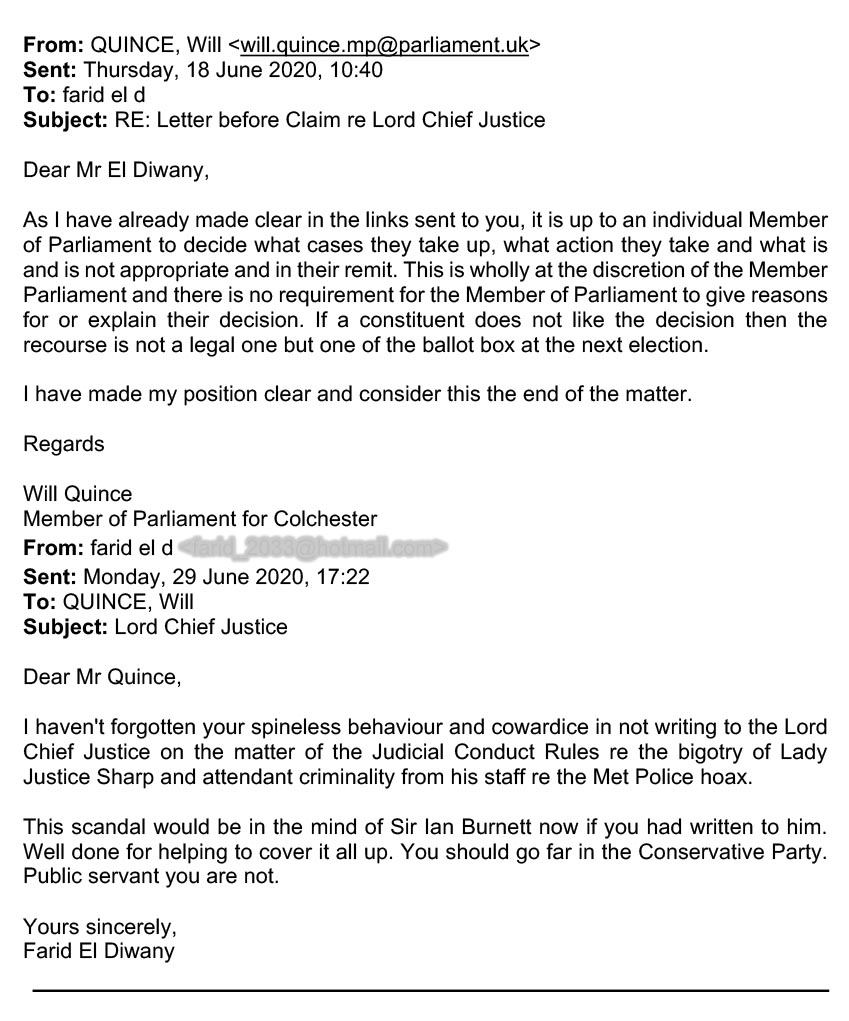 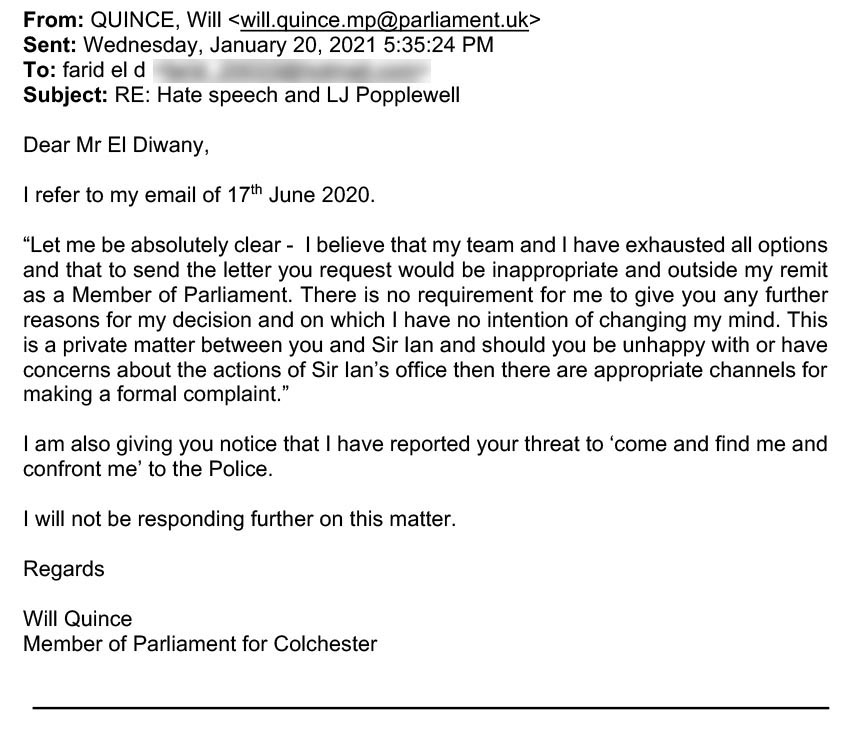 Will Quince M.P makes the Daily Mail on 2 March 2022 as Children's Minister. Ha! Climbing the greasy pole would have come to a shuddering halt, would it not, if Mr Quince had complied with constituent Farid El Diwany's 2019 heartfelt request to highlight criminality amongst the staff of Lord Chief Justice, Sir Ian Burnett. Will Quince refused to do the honourable thing and write to tell Sir Ian that his staff were refusing to give him Mr El Diwany's letters - coupled with Lord Pickles own letters - requesting a change in the Judicial Conduct Rules to prevent a repeat of bigot judge, Lady Justice Sharp, refusing to condemn the recorded hate-crime emails (see them above) sent to Mr El Diwany thanks to a High Court defendant and read out to her in Court when she was plain Mrs Justice Sharp. Pure Islamophobic discrimination by Sir Ian Burnett's staff - covered up by Will Quince M.P. He is no friend of Muslims. Only Quince himself would have got an answer: Sir Ian himself would have been obliged to address the complaint and require his staff to give him ex-Lincoln's Inn Solicitor Mr El Diwany's letters. But no! Quince didn't think it was 'right' to 'interfere with the judiciary'. He refused to write to Sir Ian and then reported Mr El Diwany to the Police after being reprimanded by an outraged Mr El Diwany.